And here it is, the call for papers for the 30th anniversary conference of the John Donne Society in Baton Rouge, 26-28 February 2015. The deadline has been extended to 15 September. 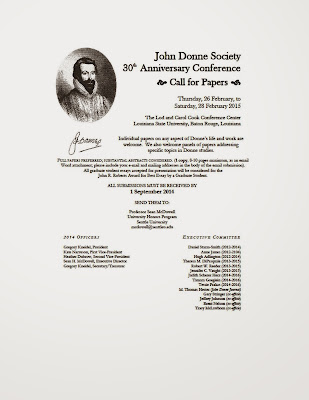 Posted by Brent Nelson at 16:54 No comments:

Here are my notes on the papers presented at the 2014 conference of the John Donne Society in Baton Rouge, LA treating Donne's prose. If anyone has any notes to add, or corrections mine, please add a comment below.

“Dr. Donne, Serial Stripper: Preaching and the Apocalypse of the Self in the 1625 Sermon on the Conversion of St. Paul and the 1626 Easter Sermon.” BRYAN ADAMS HAMPTON, University of Tennessee, Chattanooga.

Donne understood preaching to have a prophetic-apocalyptical function: to ransack the conscience and then console, to strip and then clothe, resulting in an alienation and then retrieval of the self. Donne was concerned with a “slackening” of preaching, that is, a diminishing of energeia and rigor. The sermons identified in this paper’s title speak to this concern along the fault-line of sermon and ceremony. In his 1625 sermon on the conversion of St. Paul, Donne depicts Saul’s conversion as a reconstitution of the self, and this conversion is understood in sacramental, ceremonial terms: as a consecration, a transubstantiation. In sum, ceremonies are not to be diminished, but neither are they essential: preaching is. Jesus in many instances used ceremonial process, but it is his spoken word that has power.

“The Politics of Circumspection and Religious Toleration in Donne’s Sermons.” ANGELA BALLA, University of Alabama, Huntsville.

In reading done, it is important to keep in mind the subtle difference between freedom of conscience (imperative of individual conscience) and tolerance (imperative of allowing such freedom to others). Donne’s sermon at Paul’s Cross to the Lords of the Council on the 24 March 1616/1617 (Proverbs 22:11), while James was in Scotland, presents both a bottom-up and a top-down model of toleration. It was an early case of Donne’s tactics of inclusion and his exercising of indirect polemic. However, Donne’s emphasis on the purity of the heart (conscience) all but ensures social conflict, complicated by a political structure wherein the king dispenses reward to people for their purity of heart understood as the king’s “friendship.” Constraints on the king’s power contributed to the bottom-up direction: it is the king’s duty, an obligation, to be the “friend” of a man of pure heart. “Purity” is constituted as sincerity of faith as well as truth in religion. Donne uses King David as a caution against pride, urging generous tolerance in humility.

“Arguing without Arguments” in Essays in Divinity and the Devotions. BROOKE CONTI, SUNY, Brockport.

In the Essays in Divinity there is a very different (and surprising) tenor in comparison to his other, polemical works of the time: they are irenic and tolerant. This is in part a function of genre (the essay and the devotional), but why did Donne choose this mode of exploratory prose? There are moral and spiritual dangers in polemic. One can also detect in Donne some weariness of those polemical battles. In the Essays Donne takes the Bible as it comes, all in context (starting at the beginning), and not in fragments as is done in polemic. (Though yet he slips into the same mode when he turns to refuting the polemicists.) Yet in his practice here he is soft in direct his references to Roman Catholics, falling well short of the standard aspersions. Generally, he displays instead a tendency to favour fewer divisions and a larger church, without placing the English reformed church at the centre. Donne’s rust to print Devotions was partly motivated by a sense of urgency to defend the English church against zealous, increasingly heated reformers, emphasizing community and congregation, centrally illustrated in the practice of bell-ringing. Polemic is woven into the devotional, and here Donne is rather more interventionist in current controversies, taking the English church as his point of reference. The first person narrative performs the importance of these practices in community. The devotional invites a more charitable engagement with controversy.

Over the span of his career Donne considered himself meteor-like in his mutability. Physical eruptions were often characterized as meteors of the body. Meteors were made of various minerals: some more mutable than others. The sixteenth century combined three paradigms for understanding meteors: the pagan, the secular, and the Judaic-Christian paradigms. The opening meditation suggests that Donne’s affliction is meteoric, that is, an accident, which, in Aristotle’s meteorology, means there is no identifiable cause. And worse yet, human imagination exacerbates a humoral imbalance. In Expostulation 1, the meteor turns to marble: stable and strong. Here, the meteor finds meaning. In the prayer, the voice of God is found to be the earthquake of the body and the mind. Donne’s experience in illness is suspended between earth and heaven, suspended as a meteor (Expostulation 3).

“Donne and the Countess of Huntingdon, Revisited: The Evidence of Donne’s Letters.”DENNIS FLYNN, Bentley University.

Based on the letters being edited for the forthcoming OUP edition, Flynn sees no indication of the close relationship that biographers claim existed between Donne and Huntingdon. In a 1622 letter to his friend Henry Goodyer, Donne represents himself as being known to Lady Huntington only in her memory of their acquaintance in the remote past, and as maintaining contact in her memory through the greetings he sends through his Goodyer as intermediary. He presents himself as servant to Goodyer who is a servant of Hutingdon. In earlier letters, Donne’s expresses his desire to seek pardon for some unspecified social misstep and to re-establish a personal connection with the Countess. Donne’s verse epistle “To the Countess of Huntington,” the only extant writing explicitly addressed to the Countess, is therefore all the more surprising for its misogyny. Without immediate context, it is difficult to see how this poem in its flippant irreverence could help repair or build any relationship with Huntingdon. One wonders whether Goodyer, as a good friend and intermediary, might have declined to deliver it.